Born Rodrigo Borgia, Pope Alexander VI did everything from selling church offices to hiring 50 prostitutes in one night to secure his place as history’s dirtiest pope. 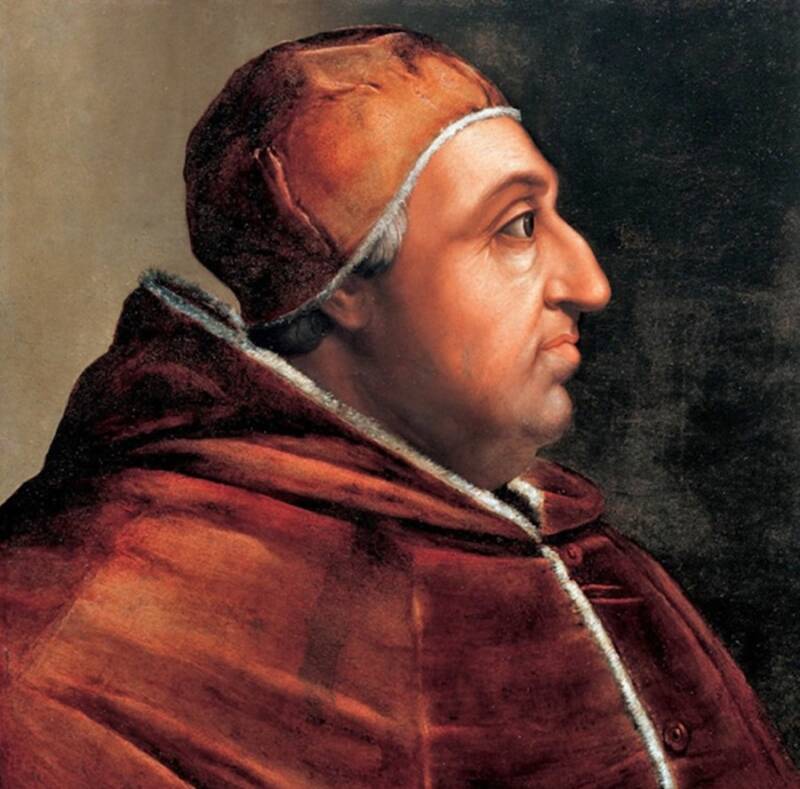 Wikimedia CommonsPope Alexander VI’s outrageous indiscretions during the Renaissance have made him a notorious figure in the church’s history to this day.

The late 15th-century rule of Pope Alexander VI was rife with nepotism, bribery, and scandalous sex — a legacy that’s caused him to be called the most corrupt pope in the history of the Catholic Church. From the start, the young man born Rodrigo Borgia bribed his way to the top and used his position to enrich his friends and family.

In addition to his own misdeeds, his family’s notorious story abounds with illicit affairs and assassinations, including rumors of incest and fratricide between Pope Alexander VI’s own children.

But now, some historians argue that perhaps Pope Alexander VI wasn’t really as bad as his reputation suggests. 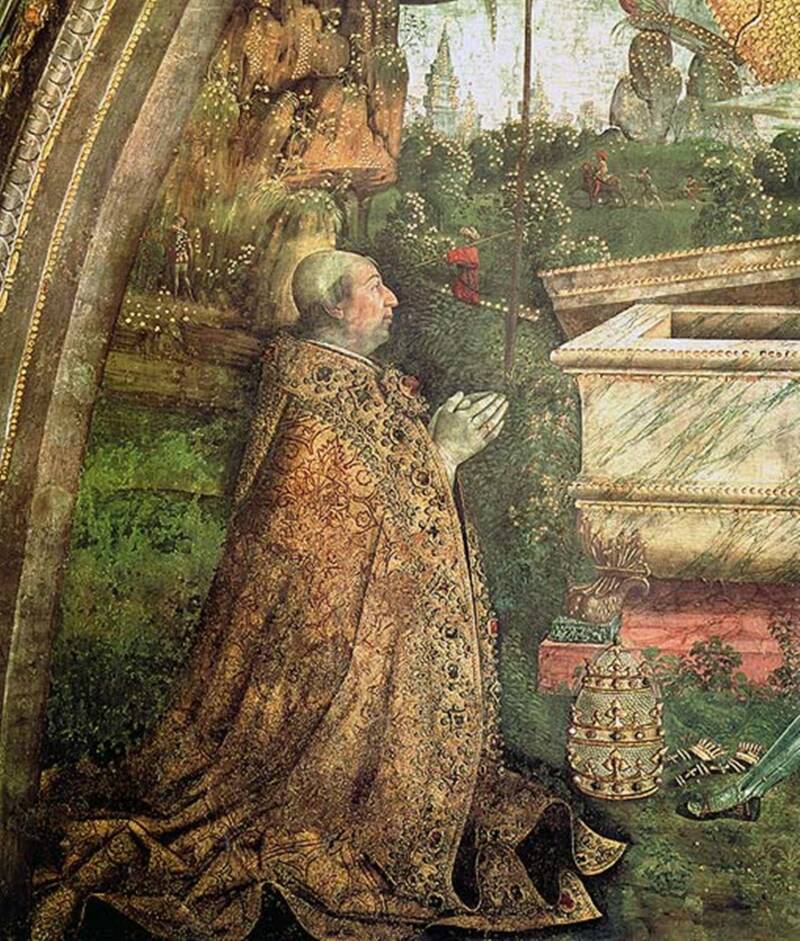 Wikimedia CommonsBorn into nobility, Rodrigo Borgia was set on the path to power long before he became Pope Alexander VI.

Pope Alexander VI was born Rodrigo Borgia in the Spanish town of Xàtiva, near Valencia, in 1431. The infamous Borgias were Spanish nobles who attained power and wealth in Spain and across the Italian peninsula during the Renaissance by securing high-ranking civic and ecclesiastical offices. The family rose to even greater heights following the papal appointment of Rodrigo’s uncle, Alfonso de Borgia, who became Pope Callixtus III in 1455. 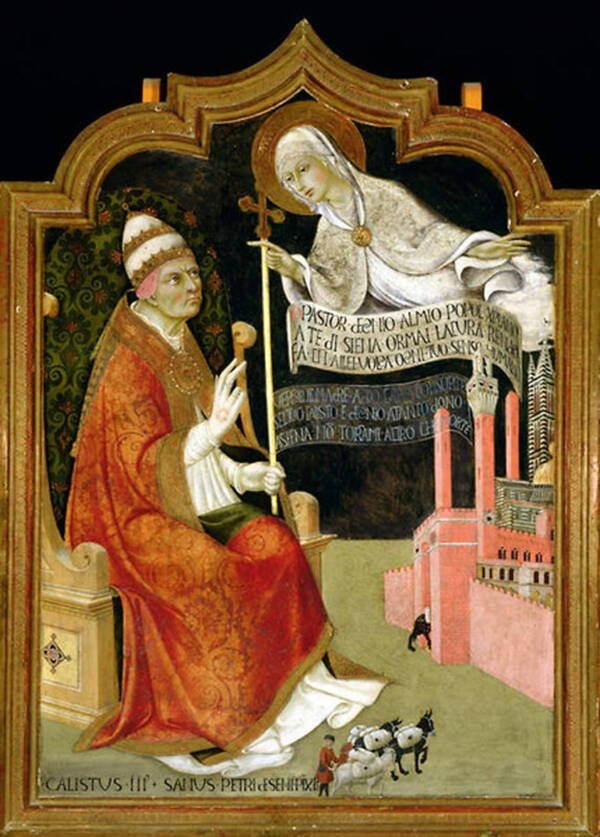 Wikimedia CommonsPortrait of Pope Callixtus III, who appointed his nephew Rodrigo Borgia to be a cardinal.

Pope Callixtus III appointed his relatives to positions in the Church, including placing two of his nephews in the cardinalate, including 25-year-old Rodrigo Borgia. A year later, he appointed the future Pope Alexander VI as vice-chancellor of the Holy See, now colloquially referred to as the Vatican. 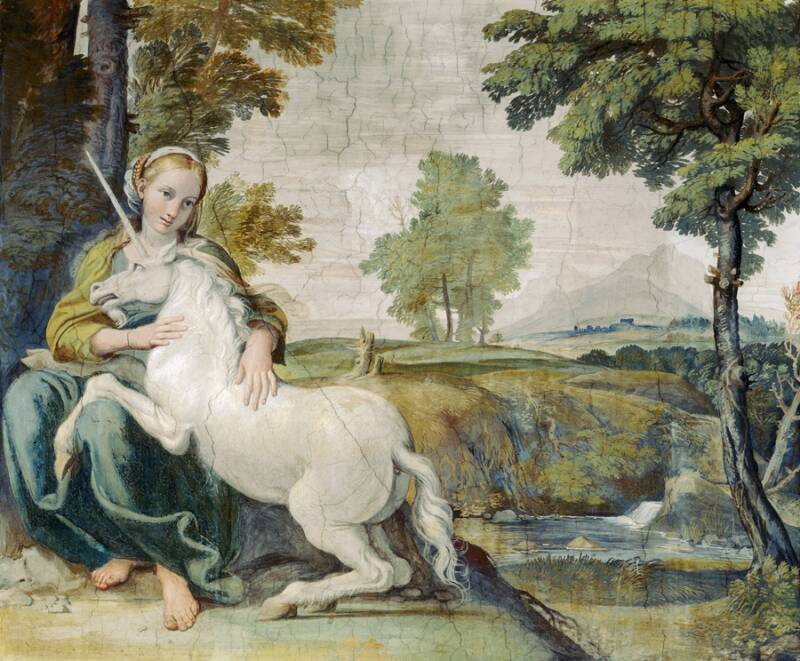 Pope Pius II, who succeeded Alexander VI’s uncle as pope in 1458 and maintained a good relationship with Rodrigo Borgia, warned him about his sex parties, calling them “unseemly.”

Back then, it was common for high-ranking men of the cloth to have mistresses. Rodrigo Borgia had two famous mistresses: Vannozza dei Cattanei and Giulia Farnese, both married noblewomen. Borgia, however, courted controversy by openly acknowledging that he fathered seven children between them, and historians believe he likely had other illegitimate children whose names have been lost to history.

But Rodrigo Borgia’s controversial love life didn’t stop him from becoming Pope Alexander VI — and his misdeeds only escalated from there. 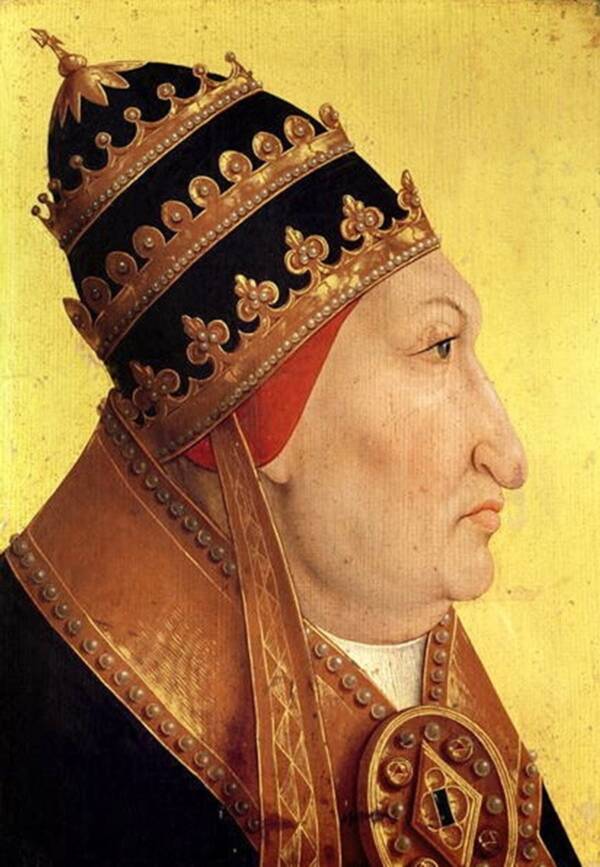 German School/Getty ImagesKnown as the “Borgia Pope,” the papal rule of Alexander VI was tainted with criminal exploits perpetrated to benefit the Borgia family.

The death of Pope Innocent VIII in 1492 sparked a power struggle among papal candidates. Like his uncle before him, the now 61-year-old Rodrigo Borgia successfully bribed a majority of cardinals for their votes and was coronated Pope Alexander VI within months of Pope Innocent VIII’s death.

Now in office, Pope Alexander VI used his influence to grow the Borgia family’s power and wealth — and his own. He appointed 10 of his relatives to the College of Cardinals, including his 18-year-old son Cesare and the younger brother of his mistress, Alessandro Farnese, who later became pope himself.

Meanwhile, he enjoyed a lavish lifestyle filled with expensive ceremonies unbecoming to the head of the church. In 1500, he famously proclaimed the year as a Holy Year of Jubilee and organized an extravagant celebration to mark the occasion. The following year, he held the most infamous party in papal history. 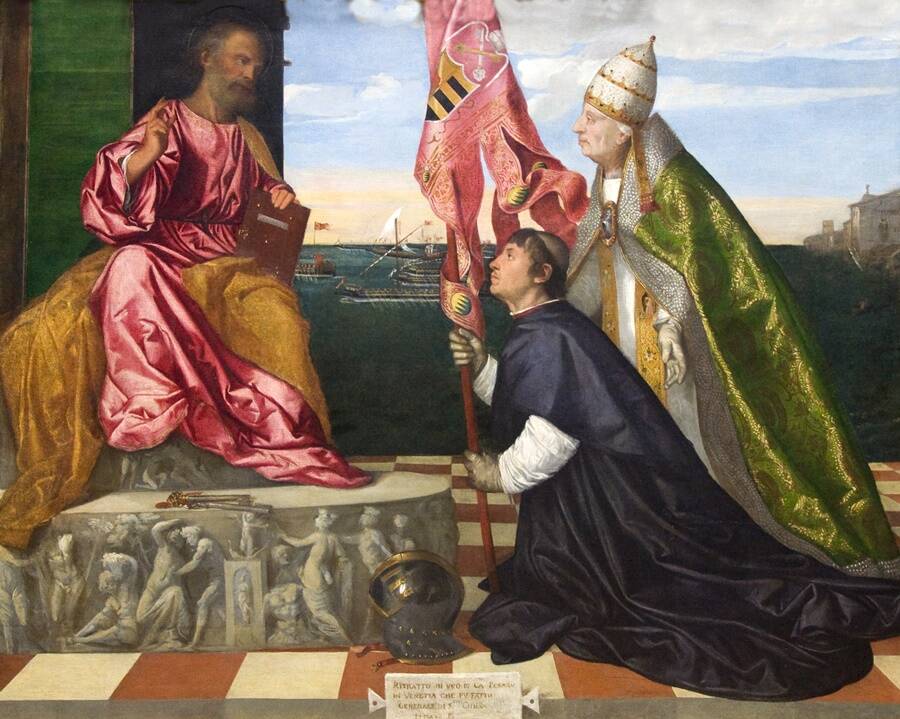 Whether this wild party actually occurred has been disputed by modern Vatican historians, yet it remains part of the lore surrounding the Borgias. Papal master of ceremonies Johann Burchard — who left behind the only account of the pope’s sordid banquet — wrote in his diary:

“After dinner the candelabra with the burning candles were taken from the tables and placed on the floor, and chestnuts were strewn around, which the naked courtesans picked up, creeping on hands and knees between the chandeliers, while the Pope, Cesare, and his sister Lucretia looked on. Finally, prizes were announced for those who could perform the act most often with the courtesans, such as tunics of silk, shoes, barrets, and other things.”

Despite doubts raised by some Vatican historians, Burchard’s diary remains a valuable resource as a firsthand account of this wild night. In another passage, Burchard wrote:

“There is no longer any crime or shameful act that does not take place in public in Rome and in the home of the Pontiff. Who could fail to be horrified by the…terrible, monstrous acts of lechery that are committed openly in his home, with no respect for God or man? Rapes and acts of incest are countless…[and] great throngs of courtesans frequent St. Peter’s Palace, pimps, brothels, and whorehouses are to be found everywhere!”

Ultimately, nights like these left Pope Alexander VI’s reign — which ended with his death less than two years after the banquet — mired in scandal that furthermore tarnished the already-infamous reputation of the whole Borgia family.

The Truth About Life Inside The Corrupt Borgia Family 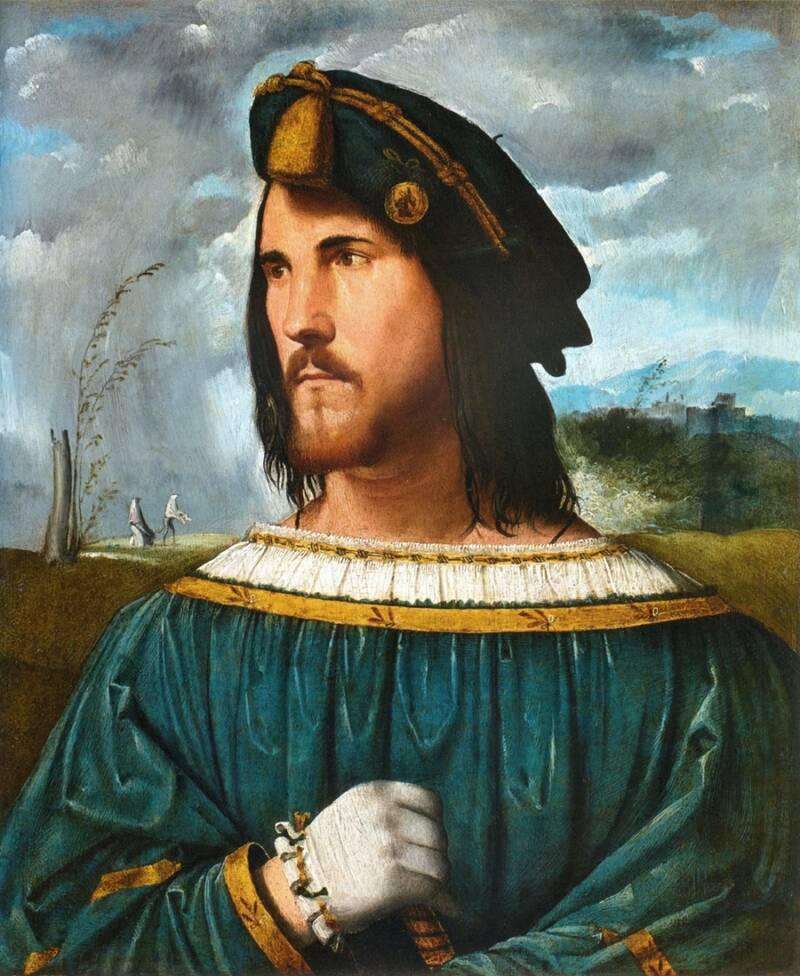 Wikimedia CommonsCesare Borgia, considered the most depraved and vicious of the pope’s children.

Pope Alexander VI was far from the only scandalous Borgia. Among his children, Cesare and Lucrezia were by far the most infamous.

After resigning as his father’s cardinal in 1498 — the only person in history to do so — Cesare Borgia participated in various military conquests across Italy. He later married into the family of French King Louis XII, another alliance forged by his father.

Cesare hoped this marriage would give him French support for his plans to take back control of the Papal States and perhaps even create a new Borgia state in Italy for Cesare to rule over himself. In 1499, Cesare led the papal army and French troops in a four-year campaign to do just that.

In battle, Cesare favored devious sneak attacks and was ruthless even with his own people. In 1502, tired of serving Cesare, a handful of his commanders staged a rebellion. Unfazed, Cesare used papal funds to replace them with mercenaries, then sent word that he wanted to meet to reconcile. At the meeting, he executed his former trusted commanders.

Cesare’s hunger for power and never-ending machinations even earned him the admiration of Italian diplomat and writer Niccolò Machiavelli. In fact, Cesare’s scheming and naked ambition inspired Machiavelli’s best-known work, The Prince.

Known for his appetite for bloodshed, Cesare was even widely believed to have been behind the murder of his own brother Giovanni, though some historians now believe Giovanni may have been killed by a jealous lover.

However, when his father died in 1503, leaving Cesare without papal backing to continue his plans, he was forced to abandon his hopes of becoming an Italian prince.

Lucrezia Borgia, meanwhile, was reputedly a conniving vixen who enjoyed poisoning her enemies. Though historians haven’t been able to confirm any of Lucrezia’s alleged poisonings, it is true that enemies of the Borgias had a habit of vanishing suddenly and mysteriously.

During her lifetime, rumors flew that the pope’s daughter wore a ring with a secret compartment containing various toxins so she could stealthily kill at any time. Lucrezia’s close relationship with her father, and her habit of standing in for him when he was unable to attend to papal affairs, gave her easy access to the food and drink of his foes. 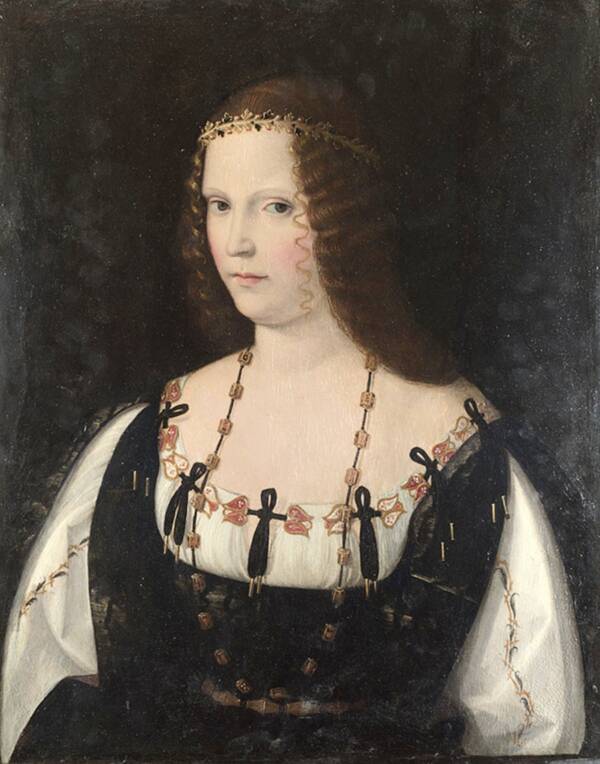 Like her brother, Lucrezia was also married off to forge political alliances. However, unlike her sibling, Lucrezia went through three different arranged marriages.

In 1493, when she was 13 years old, she married the Lord of Pesaro, Giovanni Sforza, but it didn’t last long. Alexander soon annulled the marriage after Sforza was no longer viewed as a valuable political tie to leaders in Milan. The annulment was performed on the dubious claim that Sforza was impotent and unable to consummate his four-year-long marriage with Lucrezia.

However, at the time of the annulment, Lucrezia is believed to have been pregnant. Months after her first marriage ended, a child of unknown parentage was born into the Borgia family. Alexander issued two papal bulls regarding the child, first claiming him as Cesare’s son, then as his own.

Lucrezia was suspected of bearing the child with a stable boy named Pedro Calderon, who then turned up dead near the river by the family estate. As for Lucrezia’s ex-husband, he accused the pope’s daughter of carrying on affairs during their marriage with her own father and brother.

Her second husband, Alfonso of Aragon — the illegitimate son of the King of Naples — was attacked by mysterious assassins in 1500, though many suspected Lucrezia’s father and older brother, Cesare, were behind the murder because he’d allied himself with France against Italy.

Lucrezia’s third politically-motivated marriage turned out to be more lasting. In 1502, she wed Alfonso de l’Este, Duke of Ferrara, with whom she had eight children. During this marriage, she became a respectable duchess. In fact, some modern historians believe that earlier in her life she was driven to behave badly by her corrupt family.

Perhaps most notoriously, some of that corruption may have involved incest. During their lifetimes, the close relationship between Cesare and Lucrezia was scrutinized by the Borgias’ enemies who claimed they had an incestuous affair. Some even said that Lucrezia was having an affair with her own father, but historians largely chalk these stories up to political rumors. 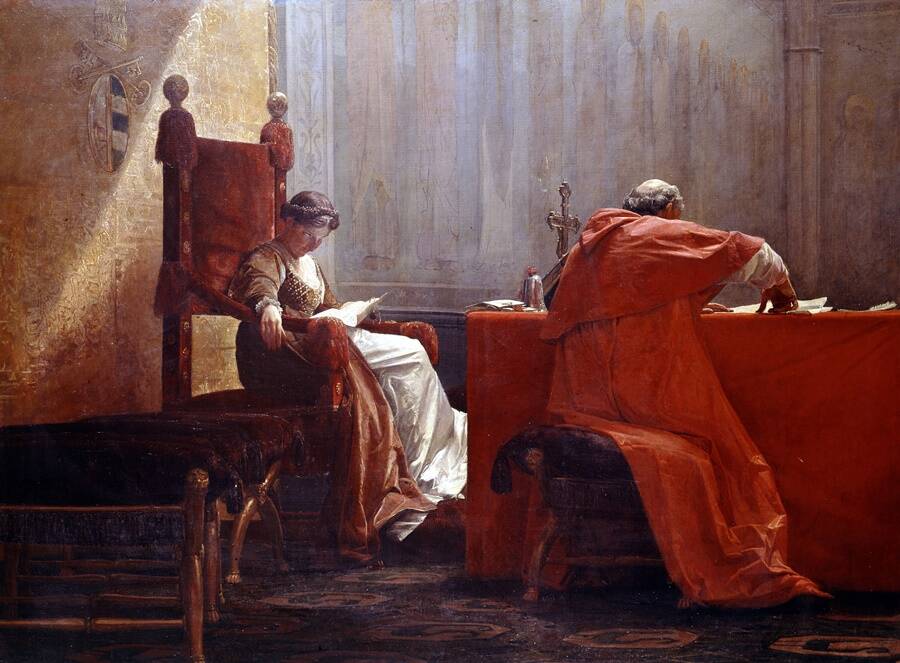 Mondadori Portfolio via Getty ImagesYoung Lucrezia sitting beside her father, the pope. Enemies of the Borgias spread rumors that the father and daughter were engaged in an incestuous affair, but historians believe these stories were politically motivated.

Such scandals plagued the Borgia name throughout history — and rightfully so given that many of their reported misdeeds truly happened. But it is important to put their exploits within the context of the Renaissance era, when noble families of Italy like the Colonnas, the Medicis, and the Della Roveres all schemed their way to positions of power through similar if not worse acts.

Likewise, others corrupted the papacy long before Pope Alexander VI. In 1458, for example, Cardinal Guillaume d’Estouteville promised lucrative rewards to anyone who would vote for him. In that same era, Pope Martin V — born Otto Colonna — secured estates for his relatives in the kingdom of Naples throughout his papacy.

So why were Pope Alexander VI and his Borgia kin more vilified than their peers? Experts believe their identity as Spanish outsiders contributed to their infamy.

Pope Alexander VI died in 1503 after a mysterious disease caused his body to bloat and become discolored. His death came a few days after a dinner with Cardinal Adriano Castellesi, who was supposedly the target of a poisoning scheme by Cesare. Many suspected the pope’s son had accidentally poisoned his father instead of Castellesi. Other historians, however, theorize that the pope had succumbed to malaria.

But even with Pope Alexander VI gone, his filthy legacy remained. Julius II, who succeeded Alexander, famously said, “I will not live in the same rooms as the Borgias lived. He desecrated the Holy Church as none before.” Indeed, the Borgias’ apartments remained sealed until the 19th century, more than 300 years after their misdeeds rocked the Vatican to its core.

Now that you’ve learned about the scandalous life of Pope Alexander VI, read about the mysterious death of Pope John Paul I and find out whether Pope Benedict XVI and Pope Francis really did have a heart-to-heart as portrayed in The Two Popes.